Why Citations Should Be Part of Your Backlink Building Strategy The past two years haven’t been great for many local businesses. The pandemic introduced more budget strains, severe limitations and even changed customers’ priorities and behaviours. These burdens weighed on an already competitive environment, where online visibility could make or break a business. Perhaps, in turn, local Search Engine Optimisation (SEO) re-emerged as a local visibility asset. These practices optimise websites and business profiles for local search, as the name implies, and hinges on such off-page activities as backlink building. But unlike its general counterpart, local SEO has much to gain from citation building as well. In fact, citation building for local SEO can even synergise with backlink-building campaigns, as most of its practitioners prove.

First things first, let’s briefly clarify what citations are – and what they are not. There’s a surprising amount of confusion around the term, including mistaking citations for backlinks. While some citations can undoubtedly act as backlinks, effectively, the two are distinctly different.

In brief, citations are online references to one’s business information. That typically refers to NAP; Name, Address, and Phone number. As we’ll discuss next, there are some variations and room for additions, but all citations are fundamentally online NAP references.

In the context of local SEO, citations typically refer to business listings on directories, such as Google Business Profile (GBP). Their existence confirms a business’s location for search engines and reassures them of its local value and relevance.

In fact, that’s the foundation on which David Mihm, who coined the term in 2008, based the value of citations:

Of course, much has changed regarding citations and citation building since then – as he also stresses. But the value of citations remains the same; they contextualise a business’ value, offerings, and trustworthiness for search engines.

As mentioned above, it’s noteworthy that there are different types of citations. The two primary distinctions are structured and unstructured citations.

Structured citations are complete citations on various business directories, such as GBP (formerly Google My Business) and Yelp. This type can be controlled by the business in question via third-party data providers.

An example of a structured citation would be the following: 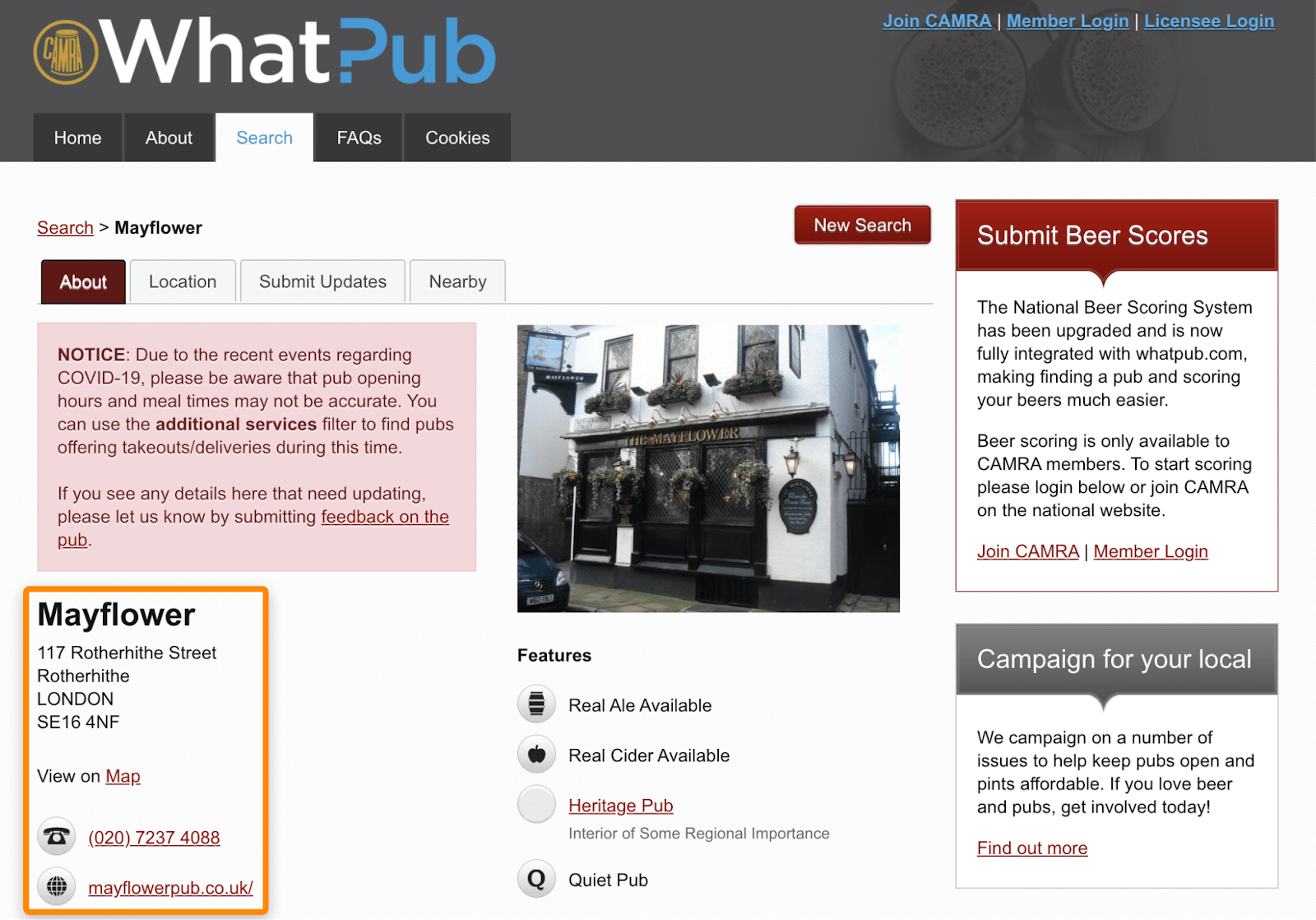 Conversely, unstructured citations are those on blogs, publications, and other sources across the web. Those are not controllable by the business being referenced, and may often be incomplete in their information.

As you can see, the former follows a strict, specific structure, while the latter follows far fewer rules.

Finally, perhaps you’ve noticed that both of these examples include their business links. For many, these constitute a different subtype of citations – as traditional citations would only include NAP information. This subtype is dubbed as NAP+W or U+NAP, referring to the inclusion of one’s website or URL, respectively.

Naturally, in the context of citation building, those are very valuable. They can effectively act as backlinks, generating additional traffic and improving backlink building campaigns. As such, many consider them the ideal citations for SEO purposes.

The ROI of Citations

On the subject of this endeavour’s effectiveness, one may rightfully wonder if it’s worth the investment in terms of ROI. After all, local citations reportedly don’t impact rankings as they used to: 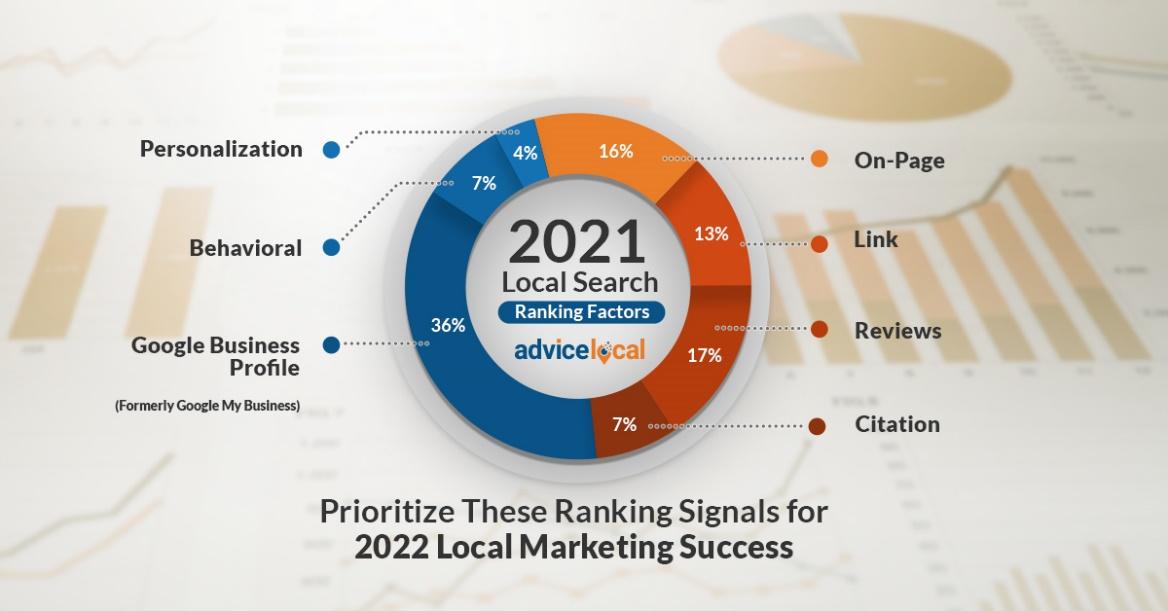 Citations don’t exist in a vacuum. However, they improve backlink building campaigns, and they strengthen trust signals. They even produce traffic, creating positive engagement signals for further SEO benefits.

In brief, citations offer ample benefits while costing very little beyond citation management costs. Under this lens, the value of citation building for local SEO cannot be overstated.

“The average spend on citations accounts for less than 2% of annual marketing spend but accounts for 10% of the ranking impact — that’s a very positive ROI. And considering that most businesses don’t need to update their citations every year, this ROI looks even more compelling with a multi-year view.”

Similarities and Differences Between Citation Building and Backlink Building

Finally, having touched on the similarities and differences between citations and backlinks, here we may briefly consolidate them for clarity.

The two are similar as regards:

Finally, as we’ll discuss next, both favour quality over quantity – albeit in slightly different ways.

However, the two also differ as regards:

How Building Citations Can Improve Your Backlink Building Campaign

Some ways in which it does so are strictly practical, organic by-products of a robust online presence. Others are entirely SEO-oriented, and some simply present opportunities for the willing business owner. To maintain some text economy, here we may delve into these benefits as conceptual groups.

A. Trustworthiness and Authority Backlink Building

Initially, local citation building directly enhances trustworthiness with search engines. It likely does so based on the logical principle that customers value information consistency, and search engines explicitly seek to deliver beneficial results to their users.

To illustrate, we may cite Google’s local ranking factors article itself. First, they note that 3 distinct factors affect search rankings:

Relevance one may cover via keywords and search intent match, and distance one can’t control. Prominence, however, Google explains can be boosted by citation building:

“Prominence refers to how well known a business is. Some places are more prominent in the offline world, and search results try to reflect this in local ranking. […]

Prominence is also based on information that Google has about a business, from across the web, like links, articles, and directories. Google review count and review score factor into local search ranking. More reviews and positive ratings can improve your business’s local ranking. Your position in web results is also a factor, so search engine optimisation (SEO) best practices apply.”

As you can see, citations, reviews, and similar trust signals directly influence final rankings. In turn, higher rankings effectively enhance Domain Authority (DA), helping establish one as a respected voice in their industry.

This aligns with backlink building campaigns’ goals and directly aids them. Most reputable websites don’t readily accept DoFollow backlinks to less reputable ones simply because those effectively act as endorsements – both for search engines via ‘link juice’ and audiences. Thus, a higher DA score encourages DoFollow backlinks, as it serves as an additional trust signal for them.

B. Online Visibility and Final Rankings 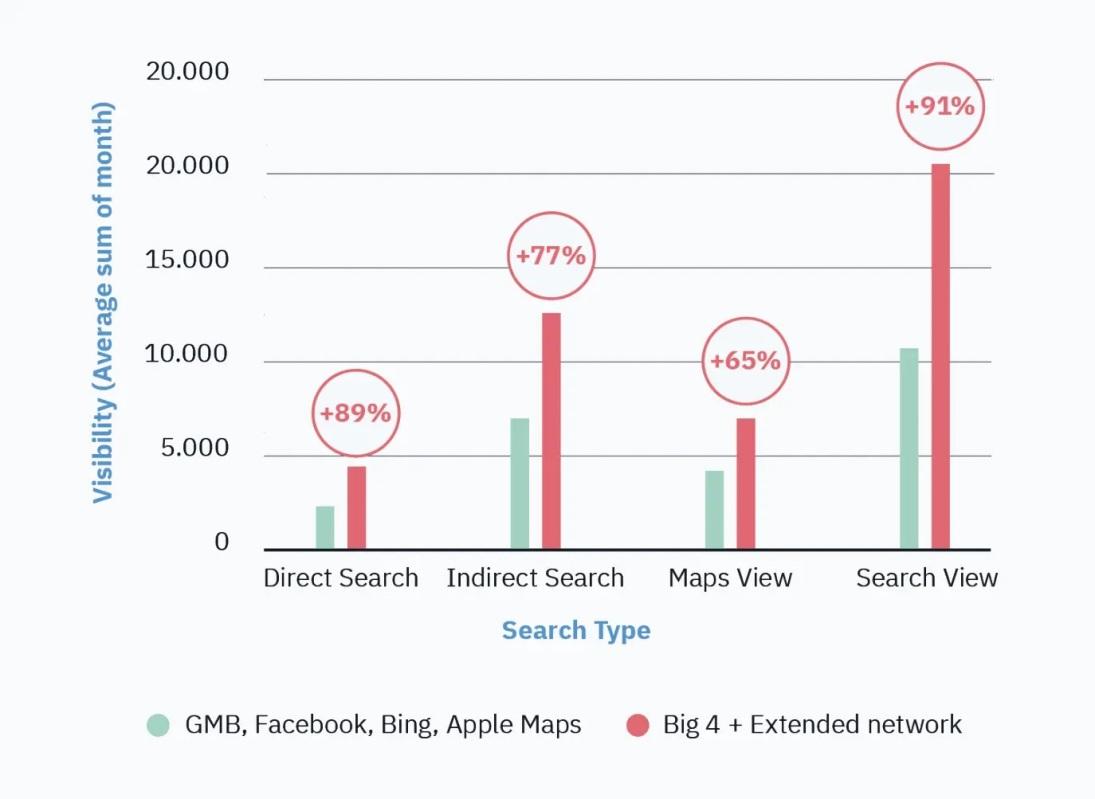 They explain the graph and how they conducted their research as follows:

“This chart comprises 6,000 total small business and enterprise locations in the US and Europe. In green, we have distribution to the big 4 platforms, and in red, the extraordinary difference in local pack visibility when local business data was pushed out beyond this to 10+ directories over the course of the 13-month testing period. Increased local pack visibility is defined not as the numeric rankings within a specific pack, but as the overall existence of a business in a greater number of packs.”

Evidently, citation building drastically affects online visibility. This we may distinguish from rankings alone; it’s visibility specifically that matters in the context of organic backlink building.

That’s because all visibility enhances organic traffic, increasing the likelihood of organic backlinks.

Accurate business information, robust general SEO, and a solid content marketing strategy generally serve to satisfy users. In turn, satisfied users are far more likely to share business listings and social media profiles, promote a business via word of mouth and even generate organic backlinks from their blogs and websites. Whether DoFollow or NoFollow, those backlinks will produce more traffic themselves – with zero additional effort on the business’s end.

Finally, the above combined offer further opportunities for business owners to build authority within their field. That’s simply because local prominence puts them on the proverbial map of their established peers, paving the way for networking.

To illustrate this point, consider such local SEO off-page practices as sponsoring and participating in local events. Doing so effectively requires investment and involvement in one’s local communities and industry alike. So does local backlink building, which is often reciprocal as well. For local SEO, building citations facilitates these and more, on account of just establishing one’s position as one of authority.

Business relations and a robust partner network can offer self-evident benefits in all such cases. In our local context, citation building can serve as the proverbial springboard that lets you do so.

That said, citation building needs to extend beyond what Moz dubbed the “big 4” above. Of course, you may consider them first:

Next, you may consider “secondary” websites and directories, for lack of a better term:

Here we contest the term ‘secondary’ for a simple reason. Moz did find diminishing returns for citation volume, but they still found broader citation building essential. In their own words,

“[B]usiness owners don’t need to distribute their location data to hundreds of platforms. About three dozen will do.”

Finally, you may submit your business information to big data aggregators to have them assist with citation building. Excluding Acxiom, who discontinued their product a few years back, the current “big 3” in the US are:

Should you need more help identifying citation sources, Whitespark offers a handy list of the top 50 by country. Beyond the US, UK, Australia, and Canada, it has expanded over the years to now include an additional 11 countries.

Finally, even if you handle “about three dozen” citations, doing so manually can needlessly drain away valuable time. As highlighted above, citation management is among the very few costs of citation building altogether – and it’s thankfully modest.

Depending on your existing tools, needs, and budget, you may consider such third-party tools as the following:

Companies like BrightLocal, Whitespark, and others also offer citation management services. If your existing tools offer open APIs, you will most likely not need them, but it’s always wise to keep your options on the table.

Citation building is by no means the easiest endeavour, but it is far from the hardest either. It simply requires some research, some manual work where needed, and due diligence with monitoring your citations. With all the benefits it can yield, both for backlink building campaigns and outside of them, it deserves your attention in 2022.

Aaron Thomas
Managing Director
Aaron is the Managing Director at Hive19 with over ten years experience in online marketing. Aaron has seen tremendous success with a variety of campaign strategies that have increased rankings and driven traffic to partnering agencies and clients. He specialises in increasing domain authority for clients’ sites and building trust within their industry.

Why is Anchor Text Important?

If you’ve spent even a little time looking into SEO, or read any of the other Hive19 blogs, then you’ll be well versed in the important role links have in...

Hive19 is delighted to announce that we’ve committed to reforestation projects in partnership with Ecologi, a social enterprise that works to achieve impactful climate action projects all over the world....

Should You Build Multiple Backlinks From the Same Domain?

Concerns around domain authority and similar metrics has led to an obsession with working towards backlinks on new, stronger referring domains, with less concern about nurturing the number of links...

We’ll conduct a manual examination of your current profile to identify any areas of strength and weakness including:

We'll send you your FREE, no obligation
report in 3-4 business days